Next time you set off on a camping trip or the power cuts out at home, make sure you are prepared. A portable inverter generator can be incredibly useful, serving as anything from a comfort provider to a life saver.

Honda and Generac are both big names in the inverter Generator business and provide high-quality products. But if the Generac IQ2000 and Honda EU200i have caught your eye, you might have noticed they have similar features at the core.

And this makes it difficult to know which is better. The Honda portable generator is more expensive, but is it worth the extra cash? And what about the digital display on the Generac? Is it superior?

Well don’t worry, we have put together a detailed review of the main features of the two portable inverter generators to help you decide. Take a look below.

For a quick overview, take a look at the pros and cons of the two portable inverter generators here.

Winner: Don’t want to read the full article? The editor’s choice is the Honda EU2000i.

Although more expensive, the Honda is the superior inverter generator in terms of overall performance, quality, and durability. It also has a longer run time and some extra features like the 12 Volt DC Outlet. On the other hand, if you are looking for a cheaper alternative, the Generac still offers some good features in return for the price. 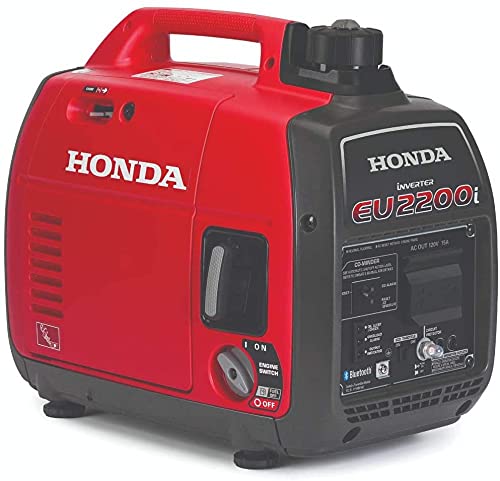 What’s the Difference Between Them?

Let’s check out the performance and features of both portable generators and see how they compare.

The Generac IQ2000 is a portable inverter generator that has a maximum output of 2000 watts. When you use it continuously, it can produce 1600 watts from the 79 cc 4-stroke motor. This is pretty decent compared with other portable generators on the market. We feel this is some of the best generators available out there in the market.

The generator has three different power modes Turbo, Standard, and Economy. The economy mod helps use less fuel and extends the run time which is 7.7 hours at 25% load. The Generac IQ2000 is easy to use with an awesome digital display mode.

This makes checking remaining power a breeze and helps you keep an eye on fuel levels. It has two 120 Volt AC outlets but unfortunately no 120 Volt DC outlines like the Honda, which is a downside.

The Honda EU2000i is also an inverter generator that is totally portable. It matches the Generac IQ2000 with the same 2000 watt maximum output and 1600 running watts output during continuous use.

The Honda however has a more powerful motor, a 98 cc motor, and is considered a more reliable machine with an eco throttle for higher fuel efficiency.

The Honda has two 120 Volt AC outlets like the Generac, but an additional 12 Volt DC outlet which is a big plus. At a 25% load the Honda runs for 8.1 hours on a single tank.

Verdict: Overall the Honda is more robust, powerful with a longer run time at quarter power and a DC outlet.

Let’s dig into the run time.

The Generac IQ2000 has a decent run time of 7.7 hours when it is loaded up to 25% of its capacity. This is great if you are just looking to use it for light use. When used at 50% capacity, the run time reduces to around 5.6 hours and not 7.7 hours.

The Honda EU2000i on the other hand, has a longer run time of 8.1 hours. It is more fuel efficient than the Generac too.

Verdict: The Honda EU2000i has a higher maximum run time so is the superior choice here.

Now let’s see how the two portable generators are to use.

The Generac generators are fairly lightweight, user-friendly, compact and come with a handle to make it easy to carry. It weighs 46.5 pounds. It has an easy to use interface with manual power switches. It is highly rated when it comes to ease of use.

What is great about the Generac IQ2000 generator is that it also has a high-tech digital display that has a power bar, fuel gauge, and run-time display. It also has useful indicator lights to show things like low oil.

The Honda inverter generators are also pretty compact, actually weighing slightly less at 45.6 pounds. This makes it slightly easier to carry and it also comes with a handle. The interface is easy to use with manual buttons to control the power but there is no digital display like the Generac.

Verdict: For design and usability the Generac IQ2000 wins with its super handy digital display.

If you are taking your generator camping you will want it to be as quiet as possible not to disturb your neighbours. There is a little contention over the noise levels of these two generators. The Generac IQ2000 claims to be super quiet generator, and even quieter than the Honda based on independent testing.

The Honda however, maintains its stance on being the quietest model around with sound levels at around 50 to 60 decibels. This is fairly standard in terms of competition on the market but can still cause a humming while in use.

Verdict: The Generac IQ2000 claims to be even quieter than the Honda, so if you are looking for the quietest generator out there, you might want to give it a try.

Now let’s see what all this costs.

The Generac is the more budget friendly choice, it RRPs from $799 through the manufacturer but you can also find it cheaper through third parties like Amazon.

The Honda usually costs up to around $200 more than the Generac. Again this can vary depending on where you buy.

Verdict: The Generac wins, generally coming in at a lower cost.

The bottom line? The Honda is the overall better performer with more robust motor, longer run time, and higher fuel efficiency. It also has a 120 DC output, the lack of which is a real downside for the Generac.

Having said that, for a lower price, the Generac still offers impressive features and has an awesome digital display as well as rivaling and beating the Honda at the noise levels. Which one will you choose?