Home » Electric Generators » What Size Generator Do I Need?

If you want a personal and portable generator that’s prepared to keep up with your power needs, it’s essential to pick the right size generator.

Given that all portable generators rate their maximum capacity in watts, however, if you’re not familiar with the power draw of your appliances, it can be challenging to determine how big of a generator do you need.

In this article, we’ll investigate the three main classes of generator size so that you’ll know which ones might be a good fit for your power needs and which might be too small or too large for you.

The first thing that you’ll need to know about generator sizes is that portable generators operate using an internal combustion engine that burns natural gas like gasoline and propane.

Because of the way internal combustion engines work, larger generators are more efficient in terms of their power output per unit of fuel consumption. This means that you will not be able to find very small generators below the minimum acceptable threshold of efficiency.

On the other hand, if you want huge generators, you’ll have no problem finding them. In other words, if you’re willing to sacrifice the portability of your generator, you can easily find a generator to serve practically any upper boundary of power draw.

Thus, keep in mind that if your power needs are closer to the low end of the range of power outputs, which we’ll discuss in this article, you’ll end up spending more money on fuel compared to your power draw. 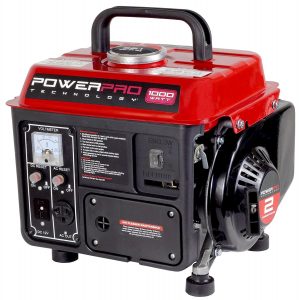 Micro generators in the 900 to 2000 running wattage range are capable of powering a couple of small appliances or one large appliance. This means that if you only want to use your generator to power a microwave, you’ll be using the majority output of your micro size generator.

Depending on how low you go with your micro generator’s maximum output, powering a microwave while keeping the lights on might be too much to ask. On the other hand, if you only want to keep the lights on and the refrigerator cold during a blackout, a micro-inverter generator is more than capable.

The significant advantage of micro-generators is that they’re the most portable and also the quietest. If you want to throw your generator into the back of your compact SUV or hatchback car, you’ll have the best chance if it’s a micro-generator.

You might still need someone to help you pick up a micro-generator if you don’t have a lot of upper body strength. However, it’s easy for two people who aren’t particularly healthy to pick up and move a micro-inverter generator.

Likewise, if you want to run your generator without waking up the neighbors, a micro-generator will keep the whine of the engine under control, though you’ll still be able to hear it if you’re within 25 feet.

Small generators are great for powering a couple of small appliances and lights. If you want to power a refrigerator, a TV, and a microwave at the same time, most small generators will be up to the task because of enough running wattage.

If you’re interested in powering campsite utilities like a space heater or a hot water heater, you should be able to finagle them to work with a small size generator. However, you’ll need to economize regarding your largest power-draw appliances, and you won’t be able to use more than one major appliance at the same time.

With a small generator, you’ll have a credible chance if you need to run a few small appliances without worrying too much. If you want to keep the lights on, the refrigerator freezer cold, the TV on, and a ventilation fan, it is the perfect generator you need. It’s a good power backup for a short power outage and has sufficient running wattage.

Small size generators are typically cumbersome to pick up unless you’re especially brawny. Many small generators have wheels that make them easier to drag around. Keep in mind that some small generators may be too large to fit inside of your vehicle, however.

If you have a full-size SUV, you won’t have any problem, but some hatchbacks may not have space for a small generator in the back. 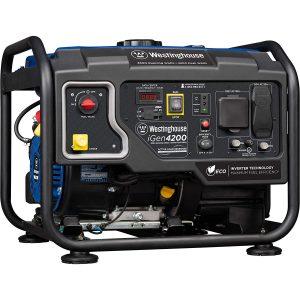 Medium generators are where you can start to power the whole house without thinking too much about economizing your power consumption.

If you want to power a small space heater, a small hot water heater, lights, a TV, a computer, and a microwave at the same time, the medium generators will be sufficient. When you start to power the most demanding appliances, however, a medium generator might not be up to the task.

In particular, if you want to power a clothes dryer, an electric range, or a central air conditioning unit, there won’t be much room to power anything else. Even something like lights or a TV might be too much to keep going while a medium generator powers one of these large appliances.

The same goes for dishwashers and clothes washing machines.

Importantly, medium generators are where the sound of the generator can start to become annoying to neighbors. Someone in the adjacent lot will hear the generator fairly loudly, even if they’re indoors near a window.

Medium generators are also where the exhaust from combusting the fuel will start to become especially dangerous.

While you should never use this size generator in an environment where it cannot vent its exhaust to the outside freely, medium generators can kill people with incidental fumes caused by insufficient ventilation.

Think carefully about where to position the generator; putting it in your garage with the garage door open may not necessarily provide an effective route for the exhaust. This is a type of generator you need if you have moderate power usage.

Getting a medium generator is a good idea if you live in an area where a blackout and power outage is common. If you want to run more number of power drawing appliances go for a large generator.

Large generators are at the edge of the offerings for portable generators. After the generators in this size category, you’ll likely need to tow the generator behind a vehicle rather than positioning it with manual effort.

Importantly, large generators are beyond the capacity of an individual to lift, and they may be too heavy for two or more individuals to lift. You will probably need two people to drag a large generator along the floor, even if it has wheels.

Large generators are also the most efficient. You’ll be able to power an electric dryer, a TV, a space heater, sump pump, lights, and perhaps a kettle at the same time. They are the ideal choice for surviving power outages.

On the other hand, if you want to power an electric range and a central air conditioning unit, you’ll need a powerful large generator to do so. Thus, in the low output large generators, you may still need to economize your appliance usage for the most demanding appliances.

Especially if you’re interested in maintaining your kitchen’s operations during a blackout, you’ll need to pick a large generator with high output. If you need to run a microwave and an electric range while keeping the lights on will overwhelm the lower-output large generators.

For minor appliances and lights, however, you can freely use as many as you want when you’re drawing from a large generator. Likewise, you don’t need to worry about powering numerous medium-power appliances like space heaters, microwaves, computers, refrigerators, and freezers.

Especially if you have one or more sump pump systems that you need to keep working throughout a blackout, a large generator will be a great choice.

Large generators are extremely loud. Your neighbors will be able to hear the generator running even when they’re inside their house, and it may be unpleasantly loud for people who are outside. Think about the sound as slightly quieter than a normal chainsaw.

Large generators are also acutely hazardous in terms of their fume output. Taking a whiff of a large generator’s exhaust is very dangerous, especially approaching higher output levels. Take care to have a path of access to the generator’s controls, which does not place the exhaust stream in between you and the controls.

Ventilation is a serious concern for large generators. Keeping them outside and at least 10 feet away from any structure is the best choice. Wind conditions can also cause problems very quickly for the exhaust plume of large generators.

Try to make sure that there is no wind condition which can cause the exhaust plume to blow back into a part of a structure where it could easily infiltrate, like windows, doors, and vents. You may not notice if you are inhaling fumes, but it could kill you nonetheless.

In other words, it’s essential to position a large generator so that its exhaust plume can only blow against the unbroken siding of a whole house at the very worst.

Now that you know everything there is to know about generator sizes, you’re ready to be a well-informed consumer.

Remember that only smaller generators are truly portable in the sense that one person might be able to move them around. Recognize that fuel efficiency is a function of the generator’s size.

Pick a right size generator that’s appropriate for your needs, and remember to take care to avoid inhaling any exhaust.